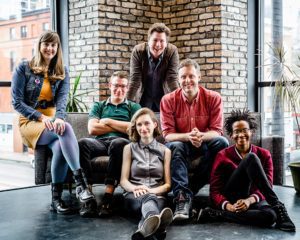 Are you sick and tired of jokes that make you feel sick and tired? Don’t let it all get you down! The Second City has the fix. Edgy, thought-provoking and always spectacularly funny, Chicago’s legendary sketch and improv comedy theater brings, ”The Cure for The Common Comedy,” to the Franklin Theatre on Saturday, September 2nd at 8pm.

Recognized as one of the most influential and prolific comedy theatres in the world,

Tyler Samples, Director, describes the six veteran performers as “funny and weird” playing characters that everyone will undoubtedly find familiar. Samples adds, “They’re planning to do a lot of improv and audience interaction, to the point where it will feel like they’re playing to a group of friends. It’s a moment in time specific to what is in the room and who’s watching. A lot of silly versions of everyday things, family dynamics, adult children and their parents, couples and first dates.”

The Second City continues to produce the premiere comic talent in the industry and has grown beyond a single stage to become a diversified entertainment company. Training centers in Chicago, Toronto, and Los Angeles teach thousands of students every week, and four touring companies perform Second City revues all over North America and abroad. The Blue Co. will be the cast for the Franklin Theatre show.

Tickets for The Second City can be purchased online at www.FranklinTheatre.com or by calling the Box Office at 615-538-2076.