A Homecoming for John Tesh at the Franklin Theatre - Franklin-Theatre
615.538.2076 Sign up for our Newsletter

A Homecoming for John Tesh at the Franklin Theatre

A Homecoming for John Tesh at the Franklin Theatre 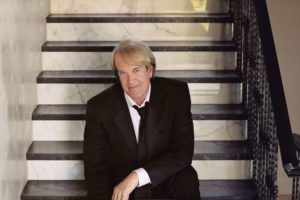 After more than three decades as a world-renowned entertainer and composer, John Tesh’s recording and live concert career continues with his new show “Grand Piano Live” that includes a stop at the Franklin Theatre on Friday, October 27th at 8pm.

Tesh is a six-time Emmy Award winner, two-time GRAMMY nominee, with three gold records, seven Public Television specials and 8 million records sold who established himself as one of the most prolific and successful composers of the 90s. With 50-plus recordings into his multi-faceted musical and broadcast career, John Tesh’s highly successful and varied career path includes a string of #1 radio hits, 12 years as an investigative journalist, a 10-year run as anchor on Entertainment Tonight, broadcast host and music composer for the Barcelona and Atlanta Olympic Games, and the unique distinction of composing what critics have hailed as, “The greatest sports theme song in television history,” the NBC SPORTS’ NBA Basketball Theme.

The Los Angeles resident also spent the early days of his broadcasting career working as a news anchor at WSM-TV in Nashville.  Tesh said of his upcoming show, “This is really a homecoming for me; anchoring the news with Dan Miller and Pat Sajak; competing for stories against Oprah Winfrey; and watching Steve Martin get his start at the Exit Inn. I can’t wait to get on stage and not only share my songs on piano but also reminisce about my time in the town that shaped my future!”

Whether at the solo piano, with a 12-piece ‘big band’ or an 80-piece orchestra, Tesh’s ability to create a unique journey for concert fans with music and storytelling has taken him from the Red Rocks Amphitheater and the Coliseum in Rome to Carnegie Hall and The Kennedy Center. John’s live television concerts, including the seminal ‘Live at Red Rocks,’ have raised more than 20 million dollars for Public Television.

Tickets for this one night exclusive engagement are available online at FranklinTheatre.com or by calling the Box Office, 615.538.2076.