MCCRARY SISTERS WITH THE FAIRFIELD FOUR AND KEB’ MO’ TO PLAY FRANKLIN THEATRE - Franklin-Theatre
615.538.2076 Sign up for our Newsletter 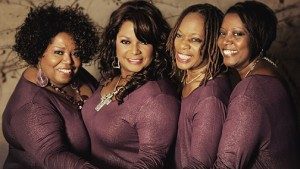 The McCrary Sisters, the daughters of the late Rev. Samuel McCrary — one of the original members The Fairfield Four, have performed with country music greats like Johnny Cash and Wynona Judd. The sisters’ list of recording sessions, and long association with Bobby Jones TV show spans genres and generations. They have recently added their unique blend of vocals to recording projects for blues greats Robert Randolph and Jonny Lang and with country artists Eric Church for CMT 2012 Artist of the Year Awards Show. Other performances have included the 2011 and 2012 Americana Music Festival shows as well as sessions for the hit TV show Nashville.

Tickets for The McCrary Sisters with The Fairfield Four and special guest Keb’ Mo’ are on public sale now and start as low as $28.00 for classic seating.  They can be purchased at the Franklin Theatre box office (419 Main Street, Franklin, TN), online at www.franklintheatre.com or by calling 615-538-2076.