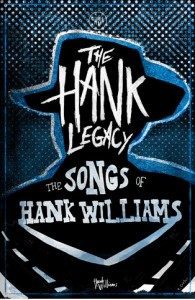 25 June 2013 – Franklin, Tenn – Studio Tenn Theatre Company is replacing the first show of their upcoming season with a world premiere Hank Williams musical revue. Currently in the making, “The Hank Legacy: The Songs of Hank Williams” will run August 29 through September 15 at the Franklin Theatre. Season tickets are currently on sale at StudioTenn.com. Individual tickets will go on sale Thursday, July 4 at 10:00 a.m. All tickets previously purchased for “Hank Williams: Lost Highway” will be honored for this production.

For company principles Jake Speck and Matt Logan, the chance to produce an original tribute to the late great Hank Williams could not be passed up. Nashville natives themselves, Logan and Speck are “very interested in music and stories from this part of the country,” said Speck. “Our hometown played a significant role in Hank’s life and career; we’re extremely gratified by the opportunity to tip our hats to him our own way.”

While Speck and Logan have each been involved with the development of many new plays and musicals over their careers, this will be the first original production for Studio Tenn.

“It’s a great privilege to be able to create a new show with Studio Tenn’s own local and regional audience in mind,” said Logan, who, together with Speck, is creating the piece. Pair that with the unparalleled acoustics and “world class, up close” intimacy of the historic Franklin Theatre—nestled mere miles from Williams’ former residence in Leipers Fork—and you have “a recipe for an unforgettable entertainment experience that cannot, by definition, happen anywhere else.”

Unlike “Lost Highway,” “The Hank Legacy” is not biographical. The production will follow a “musical revue” format—much like last season’s highly lauded “Smokey Joe’s Cafe”—drawing on the vocal and instrumental talents of a troupe of eight actors. With no one player cast as Hank, the songs themselves will be the stars of this show.

“We think this approach showcases the extent to which Hank’s iconic music has truly permeated our culture,” Logan said. “His work still resonates—not just in the country music world, but throughout many genres of American popular music. To demonstrate his music’s versatility is to make a case for its enduring relevance.”

Speck and Logan hope that “The Hank Legacy: The Songs of Hank Williams” will be the first of multiple Studio Tenn originals.

“Our mission is to keep professional theatre alive and thriving in Middle Tennessee,” said Speck. “One means to that end is to stage well loved classic pieces with fresh, contemporary interpretations; another is to embrace opportunities to periodically contribute something new to the repertoire.”

“The Hank Legacy: The Songs of Hank Williams” opens August 29 at the Franklin Theatre, located at 419 Main Street in historic downtown Franklin. To purchase tickets or find out more about Studio Tenn and its productions, visit StudioTenn.com. To get involved as a sponsor or donor, email info@studiotenn.com.