Kindie Rock Duo, The Pop Ups, To Play The Historical Franklin Theatre - Franklin-Theatre
615.538.2076 Sign up for our Newsletter

Franklin, Tenn. — Brooklyn-based musical duo, The Pop Ups, will play the historic Franklin Theatre in Franklin, Tenn. on Saturday, June 29. The Pop Ups, members Jason Rabinowitz and Jacob Stein, received a GRAMMY nomination and a 2012 Parent’s Choice Award for their second album, Radio Jungle. This wildly imaginative album debuted in April and has since received praise from the Fids and Kamily Awards, held the #1 Single on SiriusXM’s “Kids Place Live” radio show, and others alike. The first of two shows will be at 9:30 a.m., followed by an 11:00 a.m. performance. Admission is $10 and free for children under the age of 2. 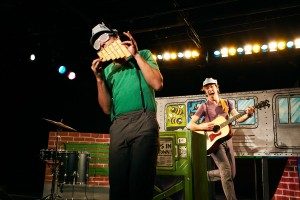 The Pop Up’s first release Outside Voices debuted in 2010 and laid the groundwork for Radio Jungle, which is an even more polished and approachable collection that displays the duos’ youthful spirit. Songs such as “Elephant” and “Math Rock” display the teachability of their music as well as the artistic potential of “Box of Crayons.” Time Out New York named them one of 2012’s Best 15 Bands for kids.

Just one of many upcoming plans for the kindie rock group, The Pop Ups will be joining Yo Gabba Gabba Live for their second tour together. Following Jason Rabinowitz’s six-month run in the Tony award winning Broadway production of One Man Two Guvnors, The Pop Ups will be doing a spring and summer concert tour as well as debuting their new puppet musical titled RADIO JUNGLE, a comedic, ecological scavenger hunt, which features songs from the GRAMMY nominated album.

Tickets for The Pop Ups are on public sale now. They can be purchased at the Franklin Theatre box office (419 Main Street, Franklin, TN), online at www.franklintheatre.com or by calling 615-538-2076.