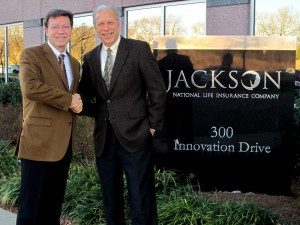 Franklin, TN:  Jackson National Life Insurance® (Jackson®) recently renewed its relationship with the historic Franklin Theatre as presenting sponsor.  The arrangements involve a three-year investment to support the high quality of programming the venue has become known for since reopening in 2011 after extensive renovations.

The theater expects to host more than 70,000 guests at 600 events in 2013 including world-class music concerts, Broadway caliber live theater, movies and a wide variety of educational, social and charity events.  Since reopening, more than $600,000.00 has also been raised through events in the space for important charitable causes in the community.  As a result of Jackson’s support, many local nonprofits serving youth and elderly in the community have had the opportunity to raise funds at this unique and historical venue.

“We’re proud to take a leadership role in supporting such a renowned landmark on Franklin’s historic Main Street and to play a role in the revitalization of the downtown Franklin area,” says Jackson President and CEO Mike Wells.  “Since expanding Jackson’s operations to Franklin, we have built a robust charitable program that focuses on enriching the communities where our associates live and work.  The Franklin Theatre is a unique venue for Jackson to host corporate and community events, and the outstanding entertainment that the theater attracts helps to drive tourism for the entire region.”

“As our presenting sponsor, Jackson leads a premier group of annual supporters investing in a level of programming that inspires, challenges and moves us,” adds Franklin Theatre Director Dan Hays.  “They are an ideal partner, wonderful neighbors and we are honored by their generosity and leadership.”

The reinvention of the Franklin Theatre adds to a growing entertainment reputation for the area.  With an already thriving shopping and dining scene, the charms of the historic downtown area now include several music venues including Puckett’s Grocery & Restaurant, the Franklin Mercantile, the Bunganut Pig and others.  Grey’s on Main, a new restaurant opening this winter, will also host regular music performances.

Historic theaters routinely require donated funds and sponsor relationships to sustain programming and the Franklin Theatre has embarked on an annual campaign to raise approximately $300,000.00 to support those purposes.  Those interested in getting involved are encouraged to contact the Theatre to explore options.

Jackson National Life Insurance is a leading provider of retirement solutions with assets of nearly $130 billion and more than 4,000 employees nationwide.  The company is one of North America’s leading variable and fixed annuity writers.  Headquartered in Lansing, Mich., Jackson opened its Franklin regional headquarters in the spring of 2010.  Since then, the organization has expanded its Franklin branch to incorporate a new Information Technology (IT) center.  The Franklin office now employs nearly 400 associates, and continues to recruit for top talent.

Originally built in 1937, the Franklin Theatre re-opened to the public in June 2011 following a multi-year, multi-million-dollar restoration.  The Main Street landmark is owned and operated by the nonprofit Heritage Foundation of Franklin and Williamson County.  More information is available online at www.franklintheatre.com.