FRANKLIN THEATRE WELCOMES GIFT OF GRAND PIANO - Franklin-Theatre
615.538.2076 Sign up for our Newsletter 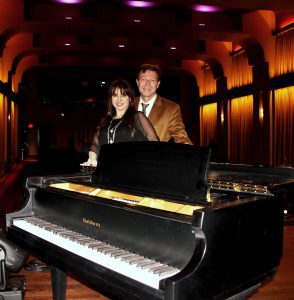 FRANKLIN, TENNESSEE – The Franklin Theatre recently accepted a new addition to their facilities, as the Miller Piano Specialists and Gibson/Baldwin delivered a sparkling new grand piano into the music venue.  The Baldwin R1 Artist Grand model will become an important instrument for many future performances and was used for the first time in November during the live taping of renown vocalist and songwriter, Deborah Allen’s internet TV show “The Deborah Allen Show…Live at the Franklin Theatre”, which will air on DEB-TV/altimarc.com.

Ms. Allen, a Franklin resident and an endorsee of Gibson/Baldwin, was responsible for approaching the piano and instrument manufacturing company and spontaneously putting in a request for this incredible gift.

“I was hoping to give away a Gibson guitar at the TV taping and while on the phone with them I had an impulse to ask for a piano for the theatre, too.  When I heard a ‘yes’ coming back  to me over the phone…I was bouncing off the walls and grinning from ear to ear!” Deborah described.  “I am honored to partner with Gibson/Baldwin to gift our theatre with a beautiful new grand piano!  It truly makes my heart smile to be able to give back to my community which has such a passionate love for the arts.”

Gibson/Baldwin has gifted the Franklin Theatre with long-term use of this beautiful $48,300 instrument. Gibson is a globally, music focused and lifestyle-oriented company based in Nashville, Tennessee, that creates products that enrich the lives of musicians, fans and consumers.  “We are pleased to be able to give to Nashville’s surrounding communities and share with them a little piece of the Gibson lifestyle.  Hopefully this piano will add to the Franklin Theatre experience for the musicians who play there as well as the fans and patrons who come to see them,” explained Henry Juszkiewicz, CEO of Gibson Guitar.

The Miller Piano Specialists located in Cool Springs joined efforts with Gibson/Baldwin to generously extend their tuning and training services to the theatre and assist with other equipment costs to transport and house the piano.

The Franklin Theatre is only able to provide the community with world-class entertainment through generous contributions like this one.  “Words are inadequate to express our appreciation for the gift of this grand piano and we will remember the kindness of Deborah, Gibson, Baldwin and Miller Piano every day – but especially when notes ring from it during performances”, said Franklin Theatre director, Dan Hays.

The Franklin Theatre looks forward to the use of this gift during the 2012 holiday season, moving into 2013, and for many years to come.

Originally built in 1937, the Franklin Theatre re-opened to the public on June 3, 2011 following a multi-year, multi-million-dollar restoration.  The Main Street landmark is owned and operated by the nonprofit Heritage Foundation of Franklin and Williamson County.  More information is available online at www.franklintheatre.com.