TOMMY DORSEY ORCHESTRA TO “SWING IN” THE NEW YEAR AT FRANKLIN THEATRE - Franklin-Theatre
615.538.2076 Sign up for our Newsletter

FRANKLIN, TENNESSEE – The Franklin Theatre will ring-out the old year and “Swing-In” the new with a distinctive evening and rare middle Tennessee appearance by the one and only Tommy Dorsey Orchestra. The theater opened it’s doors to the public in 1937 on Franklin’s historic Main Street. To honor the era that first welcomed the theatre, the evening will promise 1930s swank with a 21st century flair featuring two performances by this legendary dance band. The two shows of the evening, the first an early concert and the second a dance party, go on-sale Friday, November 23 at 10:00 a.m..

No group in Big Band history can get a crowd swinging like the Tommy Dorsey Orchestra! Known as the “Sentimental Gentleman of Swing”, Tommy Dorsey was a master at creating superb dancing and listening arrangements. Tommy’s work included collaborations with the likes of Paul Weston, Axel Stordahl and Sy Oliver, and showcased singers who could project them brilliantly; most notably the leader of the Rat Pack himself, Frank Sinatra.

Today the talent of the Tommy Dorsey Orchestra carries on with their present band leader, Terry Myers. Terry has performed with The Tex Beneke Orchestra, The Les Elgart Band, The Jimmy Dorsey Orchestra, Ray Charles, Chubby Jackson, Louis Bellson, Butch Miles and many others. An exceedingly charming host, Terry will bring a welcoming spirit to the celebration and wows audiences with the band’s musical presentation. Come ready to dance!

For patrons interested in enjoying the remarkable sounds and sights of the Tommy Dorsey Orchestra, the Franklin Theatre offers an early show that includes comfortable seating and unobstructed viewing of the band in the theatre’s state-of-the-art performance hall. Cabaret seating includes a celebratory bottle of champagne for each couple! Ticket prices are $60, $65, $75.

A first of its kind for the theatre, the cabaret tables in front of the stage will be swept away, opening up the dance floor to every patron for a night of stylish revelry. This performance will also feature three complimentary drinks, a midnight champagne toast, hors d’oeuvres, and party favors. Ticket prices are $75.

If you are concerned about driving on New Year’s, the theater has made arrangements with the Franklin Trolley service to reserve round-trip rides for only $6 per person from neighborhoods within the Franklin city limits. Reservations are limited and on a first come first serve basis through December 21.

For more details on ticketing or trolley services for this special evening, contact the Franklin Theatre box office (615-538-2076) or Layne Barton at layne@franklintheatre.com .

Originally built in 1937 as a movie house, the Franklin Theatre re-opened in June 2011 following a multi-year restoration and now also hosts world class music performances, Broadway caliber live theatre and community events. The Main Street landmark is owned and operated by the nonprofit Heritage Foundation of Franklin and Williamson County. For more information visit our website at www.franklintheatre.com . 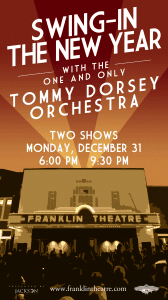