Studio Tenn Re-Imagines Dickens' "A Christmas Carol" for 2012. Another Sellout Anticipated for the Dec 6-16 Run at the Franklin Theatre! - Franklin-Theatre
615.538.2076 Sign up for our Newsletter

Studio Tenn Re-Imagines Dickens’ “A Christmas Carol” for 2012. Another Sellout Anticipated for the Dec 6-16 Run at the Franklin Theatre!

Studio Tenn Re-Imagines Dickens’ “A Christmas Carol” for 2012. Another Sellout Anticipated for the Dec 6-16 Run at the Franklin Theatre!

Charles Dickens’ timeless holiday classic–which sold out all twelve performances in 2011–will return to the historic Franklin Theatre stage December 6-16. Tickets are now available online at StudioTenn.com or by calling the Franklin Theatre Box Office at (615) 538-2076.

But leave the holiday reruns to TBS! Company Managing Director Jake Speck says Studio Tenn will be presenting a “re-imagined” rendition for 2012.”We were beyond thrilled with the wild success of last year’s ‘Christmas Carol’,” says Speck, “but we have embraced the challenge and consider it our artistic duty and privilege to give our growing audience something new this year–a fresh interpretation.”

Others might opt for the “if it ain’t broke, don’t fix it” approach, but Studio Tenn refuses to rest on their laurels.Artistic Director Matt Logan says, “there’s good reason that Dickens’ classic Christmas tale has transcended generations across centuries. The central message is universal. We aim to celebrate the timelessness of Scrooge’s story by bringing it to life against a different historic backdrop.” 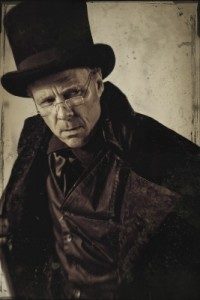 “Every act of storytelling involves full acknowledgment of the world you are in, and the world you want to escape to,” Logan explains. In designing Studio Tenn’s productions, Logan “look[s] for design elements held popular in our day and in the time period of the story–elements which serve as a portal for the audience, from one world to another.”

“This is easy for ‘A Christmas Carol’ because the design elements of the Victorian/Industrial era are currently in high fashion,” Logan says. “The modern pages of ‘Vogue’ and the silver screen are full of the silhouettes and textures from the time of Charles Dickens. In this year’s re-imagining of ‘A Christmas Carol,’ we plan to walk that line between past and present.” This is achieved most basically by using modern clothing to create period shapes, Logan explains. “We hope to ignite the imagination by telling this beloved story with bits and pieces from our existing lives,” he says. “I think audiences are bored by historical realism, but they are enriched by theatrical imagination. At Studio Tenn, we strive to hold true to innovative creation rather than mere replication.”

A complete sellout is again expected. In fact, advance sales have already prompted the expansion of the two-week run to include four additional performances. Opening weekend is especially in high demand, as it coincides with the Heritage Foundation’s annual “Dickens of a Christmas” festival. Now in its 27th year, the Victorian-era-themed street festival is expected to draw more than 50,000 people to Downtown Franklin over the course of the weekend. The festival takes place from 10 a.m. to 5 p.m. on Saturday, December 8 and noon to 5 p.m. on Sunday, December 9.

Great seats remain for “A Christmas Carol,” but tickets are going fast. Group discounts are available to parties of 10 or more–an increasingly popular option for office holiday parties or family get-togethers. For more information about group tickets, call the Box Office at (615) 538-2076.

“We love that people are making our ‘Christmas Carol’ an annual holiday tradition with their families, friends and co-workers,” says Speck. “We are going to give you plenty of reason to keep coming back, year after year”!

Studio Tenn is a professional theatre company and a 501(c)(3) non-profit organization. For more information about the company and their productions, or to learn how to get involved as a sponsor or donor, please visit StudioTenn.com.