Franklin Theatre to Host Midnight Movies This Summer - Franklin-Theatre
615.538.2076 Sign up for our Newsletter

Series Kicks Off Friday, June 15 with “The Big Lebowski” 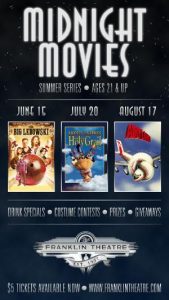 The Franklin Theatre will host late-night cult classic movie screenings this summer for patrons 21 and up. The 2012 Midnight Movie series will include “The Big Lebowski” on Friday, June 15, “Monty Python and the Holy Grail” on Friday, July 20, and “Airplane!” on Friday, August 17. Tickets are just $5 and are now available online at FranklinTheatre.com or by calling the theatre Box Office at (615) 538-2076.

Patrons are encouraged to come in costume to these screenings. Each event will feature prizes and coordinating drink specials, such as White Russians at The Big Lebowski. All patrons wishing to purchase alcohol must present a valid ID to receive a wrist band.

The late-night movies are returning this summer due to popular demand. During the summer of 2011, the Franklin Theatre sold out two late-night screenings each of “The Big Lebowski” and “Monty Python and the Holy Grail.”

“Airplane!” another cult classic comedy, will show at the Franklin Theatre for the first time the night of August 17.

The Mel Brooks Western parody “Blazing Saddles” will also show at 11 p.m. on Saturday, June 23, as part of the Franklin Theatre’s “Wild West Weekend”–a themed celebration of the venue’s first anniversary. The Wild West Weekend will also feature a concert by Western swing band The Time Jumpers on Friday, June 22 at 8 p.m. and Saturday movie screenings of the Don Bluth animated classic “An American Tail: Fievel Goes West” at 10 a.m. and 1 p.m. and the original “True Grit” starring John Wayne at 4 p.m. and 7 p.m. Ranger Doug from Riders in the Sky will be on hand to host and entertain throughout the day.

Originally built in 1937, the Franklin Theatre re-opened to the public on June 3, 2011 following a multi-year, multi-million-dollar restoration. The Main Street landmark is owned and operated by the nonprofit Heritage Foundation of Franklin and Williamson County. More information is available online at www.franklintheatre.com.