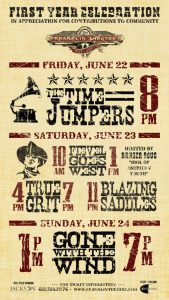 In the spirit of its grand reopening in June of 2011, the Franklin Theatre will host its first anniversary celebration with a weekend of activities and entertainment on Friday, June 22 and Saturday, June 23. While last year’s grand reopening was inspired by classic 1930s films, this year’s celebration will take on the theme of another beloved genre of old Hollywood: the Wild West–and will feature award-winning live music of the same vein.

The Wild Western Weekend will kickoff Friday, June 22 with a concert by the world renowned Western swing band “The Time Jumpers.”The award-winning and Grammy nominated Time Jumpers evolved from casual jam sessions among Nashville’s studio elite to become known for their tight arrangements, soulful singers, brilliant soloists and an irresistible swinging rhythm. Tickets for this performance go on sale to the public Friday, June 1 at FranklinTheatre.com and at the Box Office, (615) 538-2076.

On Saturday, June 23, Ranger Doug, “The Idol of American Youth” from Nashville’s famed cowboy quartet “Riders in the Sky” will entertain patrons and host a full day of Western movies, storytellings, games and activities at the Franklin Theatre.

Film screenings will begin with kid-friendly morning and matinee showings of the Don Bluth animated classic “An American Tail: Fievel Goes West” at 10 a.m. and 1 p.m., followed by the original 1969 “True Grit” starring John Wayne at 4 p.m. and 7 p.m. Entertainment will continue late into the evening with a late-night screening of Mel Brooks’ “Blazing Saddles” for patrons age 21 and up. Attendees are encouraged to dress up. This late-night screening will featured themed drink specials, costume contests, prizes and giveaways. Tickets to these movie screenings are just $5 and are on sale now at FranklinTheatre.com.