Franklin Theatre Celebrates Year of Accomplishments - Franklin-Theatre
615.538.2076 Sign up for our Newsletter

From Charity Case to Social, Economic & Creative Catalyst in One Year 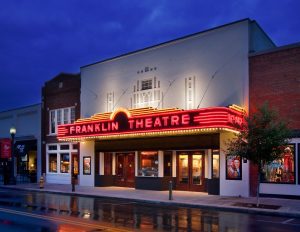 FRANKLIN, TENN, June 1, 2012–This summer, the “new” 1937 Franklin Theatre will celebrate its first birthday–the anniversary of its Grand Reopening, held on June 3, 2011. The historic movie house closed in 2007 when rising rents rendered the Main Street movie business less-than-lucrative. The nonprofit preservationist Heritage Foundation spearheaded a fundraising effort to “Save the Franklin Theatre.” Over $8.5 million was raised–entirely through private donations–for the purchase and complete renovation of the building.

A year later, the Franklin Theatre has expanded offerings to preserve the Main Street movie tradition with several screenings per week while successfully adding to its mix and mission world-class live music and theatre.

In the first year since the culmination of its donor-funded $8.5 million restoration, the nonprofit 300-seat Franklin Theater has helped raised over half a million dollars for other causes in the local community.

Some gifts just keep on giving.

“Certainly, we expected the return of movies to Main Street and the addition of live theater and extraordinary music concerts,” said the Heritage Foundation’s Executive Director Mary Pearce. “And some also saw the theater as a venue for collaboration among the arts, education and community enrichment and an opportunity to attract resources for great charitable efforts.” 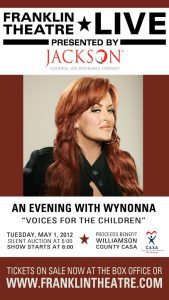 Many of the Franklin Theatre’s live events have been fundraisers for other nonprofits or charitable causes in the community. Sheryl Crow performed three nights at the Franklin Theatre in December of 2011 as a fundraiser for New Hope Academy, a local school. Delbert McClinton raised money for his ailing friend and road manager. Jerry Douglas gave a Christmas concert to benefit the Children’s Organ Transplant Organization. Wynonna Judd performed at a benefit for Williamson County CASA, a group that provides court-appointed advocates for child victims of abuse and neglect.

“We were able to generate a lot of awareness and support for Williamson County CASA through our benefit concert ‘Voices for the Children’ held at the Franklin Theatre,” said CASA board member Elizabeth Jewell. The May 1 benefit concert featuring Wynonna Judd raised $42,000 for the organization. “We’re so glad to have this venue back in our community and to be able to work together with the Franklin Theatre to support our mission of advocating for the best interests of abused and neglected children in our community.”

The Green Nights Series–the theatre’s own fundraising series in which superstar artists donate their time and talent–has so far included Vince Gill & Amy Grant, Michael McDonald, The Judds, Ronnie Dunn, and Michael W. Smith. “Green Nights” also nods to the environmental sustainability of the theatre’s new construction. Legacy Trees will be planted next fall in the name of each participating artist in “Green Nights Grove”–the location of which is soon to be confirmed.

Over the course of its first year ever as a music venue, The Franklin Theatre has become a beacon for musical diversity in the region, having hosted world-class acts from a variety of musical genres, including Americana, jazz, bluegrass, gospel, country, blues, pop, Big Band and rock and roll. Its year one roster has included 23 Grammy Award Winners.

Another new tradition, the Franklin Theatre hosts quarterly professional live theatre produced by Studio Tenn Theatre Company, a local nonprofit comprising Broadway veterans from Nashville. Studio Tenn’s first season at the Franklin Theatre featured the sold-out debut fall musical “Guys and Dolls”, an adaptation of Charles Dickens’ “A Christmas Carol,” and the moving story of Helen Keller and her teacher Annie Sullivan in “The Miracle Worker.” The phenomenal success of “Guys and Dolls” prompted the addition of an encore production to the season, “The Sound of Music,” which runs May 31-June 17–including two production on the Franklin Theatre’s first anniversary of its reopening, June 3.

“The Franklin Theatre is a powerful economic driver that generates revenue inside and outside its own doors,” said Williamson County Convention & Visitor Bureau Executive Director Mark Shore. “It has become a catalyst for extending the hours of an already vibrant downtown. As a tourism product, the theatre does as much to sustain nearby businesses, retail and restaurants as it does to sustain its own operations and is a signature attraction on its own.”

The Franklin Theatre has had visitors from all fifty United States, as well as several from Europe and Canada.

Bob Roethemeyer is current president and longtime member of the Downtown Franklin Association. His vintage, gift and home accessories boutique Avec Moi sits directly across the street from the Franklin Theatre. “It is just so exciting to see people coming and going in a well-lit building that is dedicated to entertainment of the community,” Roethemeyer said. The increased activity surrounding the theatre–especially on weekends–“has had a positive impact on the experiences of folks who come to Downtown Franklin to visit shops, eat and see a movie or show,” he said.

Valued traditions are being carried forward and new ones forged. As for the Franklin Theatre’s future, Director Dan Hays said great music, movies and theatrical productions will remain among the venue’s top priorities, joined by the development of further educational and outreach initiatives.

“We understand the responsibility to create and leave new legacies relevant to our lives today and for those that follow,” said Hays. “We can be the greatest 300-seat music venue in the world by multiplying what happens inside the theater well beyond our own community. Your dreams about what the Franklin Theatre can be are just beginning.”