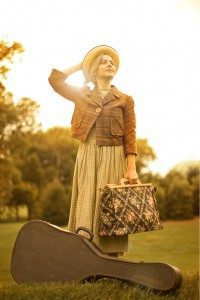 Studio Tenn Theatre Company’s production of “The Sound of Music” is set to open at the historic 300-seat Franklin Theatre on Thursday, May 31 at 7 p.m. Tickets are available at FranklinTheatre.com.

Opening weekend of “The Sound of Music” coincides with the first anniversary of the Franklin Theatre’s grand re-opening, which took place on June 3, 2011. To commemorate the venue’s one-year anniversary this Sunday, Studio Tenn is treating all patrons of the June 3 afternoon and evening performances to a free movie ticket. Vouchers will be distributed after each performance and can be redeemed at the box office through August 2012 for a movie ticket to any regularly scheduled public screening.

The nonprofit Franklin Theatre re-opened to the public on June 3, 2011 following a multi-year, multi-million-dollar restoration–including the addition of state-of-the-art sound and lighting systems, outfitting the venue for live entertainment for the first time in its 75-year history. Studio Tenn’s Managing Director Jake Speck and Artistic Director Matt Logan produced the star-studded stage show for the Franklin Theatre’s Grand Opening gala last summer, which included the popular “Do, Re, Mi” performed by cast member Shealean Newman and local school children.

Resident theatre company of the Franklin Theatre, Studio Tenn is the first professional company to bring Broadway stars along with homegrown talent to Franklin’s Main Street in original and inventive adaptations of classic American musicals and plays. Led by Broadway’s Jessica Grové (Les Miserables, A Little Night Music) as Maria and Ben Davis (La Boheme, A Little Night Music,) as Captain Von Trapp, “The Sound of Music” is an encore production to Studio Tenn’s 2011-2012 season, added after the sweeping success of its debut musical, “Guys and Dolls”, resulted in eight sold-out shows. Studio Tenn continued to sell out the house with runs of “A Christmas Carol” in December and “The Miracle Worker” in March.

“The Sound of Music” runs May 31 through June 17, with evening performances at 7 p.m. Thursday through Sunday of each week and matinees at 2 p.m. on Saturdays and Sundays. Tickets are available online at FranklinTheatre.com and at the Franklin Theatre Box Office, which can be reached directly at (615) 538-2076. Group discounts are available for parties of ten or more. For more information visit FranklinTheatre.com or StudioTenn.com.

Studio Tenn Theatre Company will offer $15 Rush Tickets to college students and Actors’ Equity Association Members beginning with their production of “The Sound of Music”, running May 31-June 17. Rush tickets may be purchased at the Franklin Theatre box office one hour prior to showtime, pending availability. A valid student ID or Actors’ Equity Association Membership is required.