Franklin, Tenn. (4/17/2012)–Studio Tenn Theatre Company today announced its lineup of shows for 2012-2013 from the Franklin Theatre stage via a series of sneak peek live performances before an audience of media and the public. 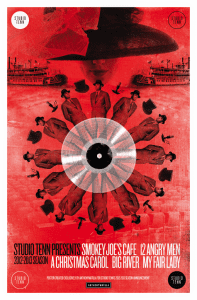 The expanded five-show season will include musicals Smokey Joe’s Cafe, Big River, My Fair Lady and holiday favorite, A Christmas Carol live on the Franklin Theatre stage. In addition, a fall production of the classic courtroom drama Twelve Angry Men will be staged at the historic Williamson County Courthouse, erected in 1858.

“We are so thrilled to be returning to the beautiful and historic Franklin Theatre with four productions this season, including three full-blown musicals,” said Studio Tenn’s Managing Director Jake Speck. “Franklin and Williamson County has demonstrated time and again their love for music and history.” The two converge, Speck said, in “Big River,” “Smokey Joe’s Cafe” and “My Fair Lady.” “We are also very excited at the prospect of taking our work beyond the walls of the theater—yet still in downtown Franklin—with ‘Twelve Angry Men’ at the historic courthouse.”

Artistic Director Matt Logan said part of the nonprofit theatre company’s overall artistic vision is to continually think outside the box. “Studio Tenn specializes in reinventing classic productions,” said Logan. “We always select shows that are generally beloved and have stood the test of time—’My Fair Lady’ and ‘Twelve Angry Men,’ for example, are among the most popular productions of all time—but it is also our artistic promise to bring something new and different to the interpretation. We want you to see these shows like you’ve never seen them before.”

2012-2013 season tickets will be made available for purchase through a special pre-sale during Studio Tenn’s upcoming run of “The Sound of Music,” May 31-June 17. At each performance of “The Sound of Music,” patrons will have the opportunity to purchase 2012-2013 Season Tickets at the Box Office in advance of the public on sale date. Remaining season tickets will go on sale to the public online at FranklinTheatre.com and at the Franklin Theatre Box Office on Wednesday, June 20 at noon.

Tickets for May 31-June 17 performances of “The Sound of Music” are on sale now at FranklinTheatre.com.

Studio Tenn, proudly tapped by the Franklin Theatre to be their resident theatre company for the 2011-2012 season, made quite a splash with their highly lauded inaugural 2010-2011 season, and their upcoming productions have fulfilled their promise to be even more stellar. Following “A Christmas Carol”, “The Miracle Worker” is set for Feb. 23rd-March 4th. And an encore production, “The Sound of Music” will wrap up the season May 31-June 17.

Studio Tenn Theatre Company is led by Artistic Director Matt Logan and Managing Director Jake Speck, both Nashville natives who made good on Broadway and have brought their experience back home to Middle Tennessee. Studio Tenn was founded in the Fall of 2009 by Logan, a nationally recognized director and artist, along with Emmy Award-winning producer Philip Hall and Broadway and film actress Marguerite Lowell Hall. The company’s inaugural production of Thorton Wilder’s “Our Town” was an enormous success and enough to convince Studio Tenn’s founders this was something that should continue. Shortly thereafter, Jake Speck left the Broadway production of “Jersey Boys” where he played the lead role of Bob Gaudio to join Studio Tenn as its Managing Director.

Studio Tenn’s mission is to “use a rich combination of talent from Nashville and Broadway to bring classic works of drama and musical theatre to life in Middle Tennessee, and provide innovative educational programs designed to entertain, educate and inspire the rising artists of our unique community.”

About the Franklin Theatre

Originally built in 1937, the Franklin Theatre re-opened to the public on June 3, 2011 following a multi-year, multi-million-dollar restoration. The Main Street landmark is owned and operated by the nonprofit Heritage Foundation of Franklin and Williamson County. Jackson National Life Insurance

A Christmas Carol: December 6-16 at the Franklin Theatre

My Fair Lady: May 16-June 2 at the Franklin Theatre