Third Week added to Studio Tenn’s “The Sound of Music”

Third Week added to Studio Tenn’s “The Sound of Music” 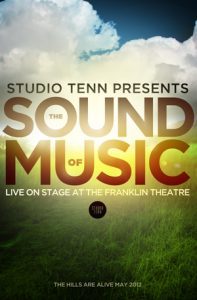 Franklin, TN – April 10, 2012– Studio Tenn Theatre Company today announced plans to open up a third week of shows for “The Sound of Music”, their fourth and final production of the 2011-2012 season. “The Sound of Music” will open Thursday, May 31 and will close Sunday, June 17 at the Franklin Theatre in Historic Downtown Franklin.Tickets for June 14-17 performances will go on sale Wednesday, April 11 at noon at FranklinTheatre.com and at the Franklin Theatre Box Office, (615)-538-2076. Tickets for May 31-June 10 performances are on sale now.

This is the second time in its young history as the Franklin Theatre’s resident live theatre company that Studio Tenn has added show times due to popular demand. The company’s December 2011 production of “A Christmas Carol” sold out just after Thanksgiving, prompting the addition of two matinee performances to the two-week run.

It was the overwhelmingly positive response to the company’s sold-out debut musical, “Guys And Dolls” that ultimately led to the decision to add another musical to the 2011-2012 season. Studio Tenn’s Managing Director Jake Speck and Artistic Director Matt Logan announced the addition of “The Sound of Music” on opening night of the company’s February production, “The Miracle Worker.”

“The people of Franklin and Williamson County have demonstrated such high level of appreciation for musical theatre,” said Studio Tenn’s Managing Director Jake Speck. “We are just ecstatic to have found such a gracious and enthusiastic audience here, and we hope to keep delivering on our mission and promise to bring Broadway-caliber professional live theatre to Middle Tennessee.”

Studio Tenn, proudly tapped by the Franklin Theatre to be their resident theatre company for the 2011-2012 season, made quite a splash with their highly lauded inaugural 2010-2011 season, which began with “Guys and Dolls” in August of 2011. Following “A Christmas Carol” in December, “The Miracle Worker” ran Feb. 23rd-March 4th. And an encore production, “The Sound of Music” will wrap up the season in May and June 2012.

Studio Tenn Theatre Company is led by Artistic Director Matt Logan and Managing Director Jake Speck, both Nashville natives who made good on Broadway and have brought their experience back home to Middle Tennessee. Studio Tenn was founded in the Fall of 2009 by Logan, a nationally recognized director and artist, along with Emmy Award-winning producer Philip Hall and Broadway and film actress Marguerite Lowell Hall. The company’s inaugural production of Thorton Wilder’s “Our Town” was an enormous success and enough to convince Studio Tenn’s founders this was something that should continue. Shortly thereafter, Jake Speck left the Broadway production of “Jersey Boys” where he played the lead role of Bob Gaudio to join Studio Tenn as its Managing Director.

Studio Tenn’s mission is to “use a rich combination of talent from Nashville and Broadway to bring classic works of drama and musical theatre to life in Middle Tennessee, and provide innovative educational programs designed to entertain, educate and inspire the rising artists of our unique community.”