The Franklin Theatre today announced that WSM 650 AM “The Legend” will be the Official Media Partner for several upcoming shows in its spring lineup. 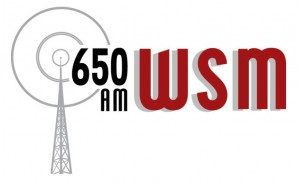 The WSM-sponsored string of shows kicks off with bluegrass royalty The Travelin’ McCourys on March 24, followed by the legendary Guy Clark with Matraca Berg on March 31, Western-swingers Asleep at the Wheel on April 7, Nashville’s original rocker, Buzz Cason & The Love Notes: “Living the Rock ‘n’ Roll Dream” on April 21 and Americana master Marty Stuart and His Fabulous Superlatives‘ Album Release Celebration on April 28. For more information or to purchase tickets, visit FranklinTheatre.com/music.

650 AM WSM is the most famed country music station in the world. Each day, the station shares country, bluegrass, and Americana as well as the excitement of Music City with friends in Middle Tennessee and listeners around the world.

WSM debuted on Oct. 5, 1925, and less than two months later, the show would birth its most famous show (and the show that would make country music famous), the Grand Ole Opry. The Opry was the first of WSM’s shows to develop such an excited audience that fans would visit live studio broadcasts. That tradition continues today not only with the Opry, but with other signature programming including “An Intimate Evening with Eddie Stubbs”, “Station Inn Sessions”, and more.

In 1928, WSM was given the frequency of 650 kilohertz and admission to an elite group of maximum power, Class 1-A clear-channel broadcasters. In 1932, the station’s new 50,000-watt transmitter made it a nation-spanning giant. At the heart of this expansion was a diamond-shaped vertical antenna located just South of Nashville, the tallest tower in the nation at the time. The station today still spans the nation with its AM signal, of course, while also circling the globe online.

WSM has gone on to become a broadcasting giant and a friend to hundreds of thousands of fans. The station has won hundreds of broadcasting awards and was named Country Radio Station of the Century by “Radio & Records” in 2000. WSM’s personalities are nationally recognized figures in country music, and its listeners range from U.S. Presidents to Country Music Hall of Famers, to artists climbing the charts toward their first number one hit. You never know when a famous listener might drop in for a visit or to take the studio’s reigns for a while.