December 20, 2011–The Board of Directors of the Heritage Foundation of Franklin and Williamson County today announced that Dan Hays will become the new Director for the Franklin Theatre. 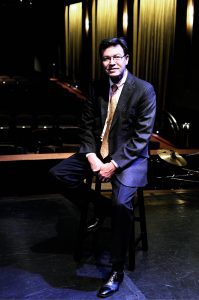 Hays’ acceptance of the post culminates a rigorous leadership search for the historic Main Street institution which recently underwent an $8 million renovation with a commitment to be the best 300 seat music venue in the world. Since its re-opening, The Franklin Theatre has hosted a diverse, world-class musical lineup including Sheryl Crow, Michael McDonald, The Judds, Keb’ Mo’, Sam Bush–with much more on the horizon–and has sold out every show in its concert series,Franklin Theatre Live.

Heritage Foundation President Cyril Stewart said the four-month executive search process was purposely intensive. “We owed it to our community to be very deliberate about finding the right person to lead the Franklin Theatre,” Stewart said. “We feel strongly that Dan Hays is the ideal choice and the theatre will build on its already phenomenal trajectory under his leadership.”

Executive Director of the Heritage Foundation Mary Pearce said she believes in Hays’ leadership. “Dan has tremendous nonprofit management experience and a wealth of contacts in the music industry,” Pearce said. “He has proven his dedication to music and truly understands and appreciates the fabric of this community and all the Franklin Theatre is and can be.”

Since 1990 Hays has headed the International Bluegrass Music Association (IBMA), a music industry trade organization headquartered in Nashville. During his tenure, IBMA developed from an association in its infancy to an influential music industry player. IBMA Board Chair Stan Zdonik said, “IBMA will sorely miss Dan’s presence. In his 21 years, IBMA has grown into a multifaceted resource for the bluegrass community. He approached the work of the organization with vigor and integrity and we were all the better for it. Speaking for the IBMA Board, we wish Dan all the best in his new position.”

“I am honored and look forward to joining the extraordinary staff at the Franklin Theatre,” Hays said. “This intimate historic Theatre is bursting with promise and is a vibrant cultural asset for our community and the talents we present.”

Originally built in 1937, the Franklin Theatre re-opened to the public on June 3, 2011 following a multi-year, multi-million-dollar restoration. The Main Street landmark is owned and operated by the nonprofit Heritage Foundation of Franklin and Williamson County. More information is available online at www.franklintheatre.com.