"A Christmas Carol" Performances Added Due to Popular Demand - Franklin-Theatre
615.538.2076 Sign up for our Newsletter

“A Christmas Carol” Performances Added Due to Popular Demand

“A Christmas Carol” Performances Added Due to Popular Demand

Tickets on sale now at FranklinTheatre.com

Franklin, TN –  December 1,  2011 – The Franklin Theatre and Studio Tenn Theatre Company today announced that two additional performances of “A Christmas Carol” will take place on Sunday, December 11 at 7 p.m. and Sunday, December 18 at 7 p.m. Tickets are on sale now at www.FranklinTheatre.com.

With the initial ten-show run more than 95% sold out, Studio Tenn’s Managing Director Jake Speck said the two Sunday evening shows are being added due to enduring demand for tickets in the local and regional community. 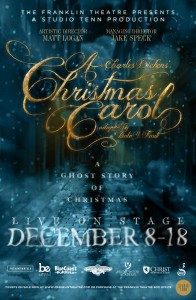 “We are thrilled with the response to this show,” said Speck. “I am elated that we are able to add these two performances and supply what the Franklin and Middle Tennessee communities have clearly demonstrated as a demand.”

Named “Best Christmas Show in Nashville” by the Nashville Scene’s Annual Best-Of issue, Studio Tenn’s “A Christmas Carol” is now in its second season and opens the same weekend as the Heritage Foundation’s annual “Dickens of a Christmas Festival” on Main Street in Franklin.

“We are so excited that Studio Tenn and the Franklin Theatre will be lending this new dimension to the ‘Dickens of a Christmas Festival’, a holiday tradition that is already so well established and beloved in this community,” said Heritage Foundation Executive Director Mary Pearce.

Studio Tenn brought Broadway players to Main Street Franklin for the first time in history this past August, with a sold-out eight-show run of the 1950 classic, “Guys and Dolls.” Studio Tenn’s Managing Director Jake Speck said he is looking forward to returning to the Franklin Theatre this December to perform another beloved piece.

Chip Arnold–recently voted “Best Actor in Nashville” by The Tennessean–will be reprising his stunning role as Ebenezer Scrooge. Speck will serve as Executive Producer, and the company’s Artistic Director Matt Logan will direct and design the show. The production is an original adaptation by Paula Y. Flautt of the classic Dickens novel. The show will be scored by a live four-piece Mozart ensemble led by Nathan Burbank and will also incorporate original compositions by Mr. Burbank.

Individual tickets can be purchased at www.franklintheatre.com or by visiting or calling the Franklin Theatre box office at 419 Main Street, 615-538-2075. Group rates are also available for parties of 10 or more. Email leah@franklintheatre.com for group sales. For more information, please visit FranklinTheatre.com

What the Critics are Saying:

“Yes, it’s back – but this Christmas Carol is worth the trip, even if it’s your 20th.”
– Martin Brady, Nashville Scene 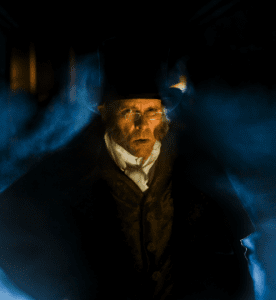 Photo of Chip Arnold as Ebenezer Scrooge courtesy of ANTHONYMATULA

Studio Tenn, proudly tapped by the Franklin Theatre to be their resident theatre company for the 2011-2012 season, made quite a splash with their highly lauded inaugural 2010-2011 season, and their upcoming productions have fulfilled their promise to be even more stellar. Following A Christmas Carol, The Miracle Worker is set for Feb. 23rd-March 4th.

Showcasing this city’s great artistic talent alongside Broadway stars, the first four shows from this young company -Our Town, Hello Dolly!, A Christmas Carol, and The Glass Menagerie, were heavily lauded by audiences and critics alike.

Studio Tenn Theatre Company is lead by Artistic Director Matt Logan and Managing Director Jake Speck, both Nashville natives who made good on Broadway and have brought their experience back home to middle Tennessee. Studio Tenn was founded in the Fall of 2009 by Logan, a nationally recognized director and artist, along with Emmy Award-winning producer Philip Hall and Broadway and film actress Marguerite Lowell Hall. The company’s inaugural production of Thorton Wilder’s “Our Town” was an enormous success and enough to convince Studio Tenn’s founders this was something that should continue. Shortly thereafter, Jake Speck left the Broadway production of “Jersey Boys” where he played the lead role of Bob Gaudio to join Studio Tenn as its Managing Director.

Studio Tenn’s mission boldly states that they will “use a rich combination of talent from Nashville and Broadway to bring classic works of drama and musical theatre to life in Middle Tennessee; and provide innovative educational programs designed to entertain, educate and inspire the rising artists of our unique community.”